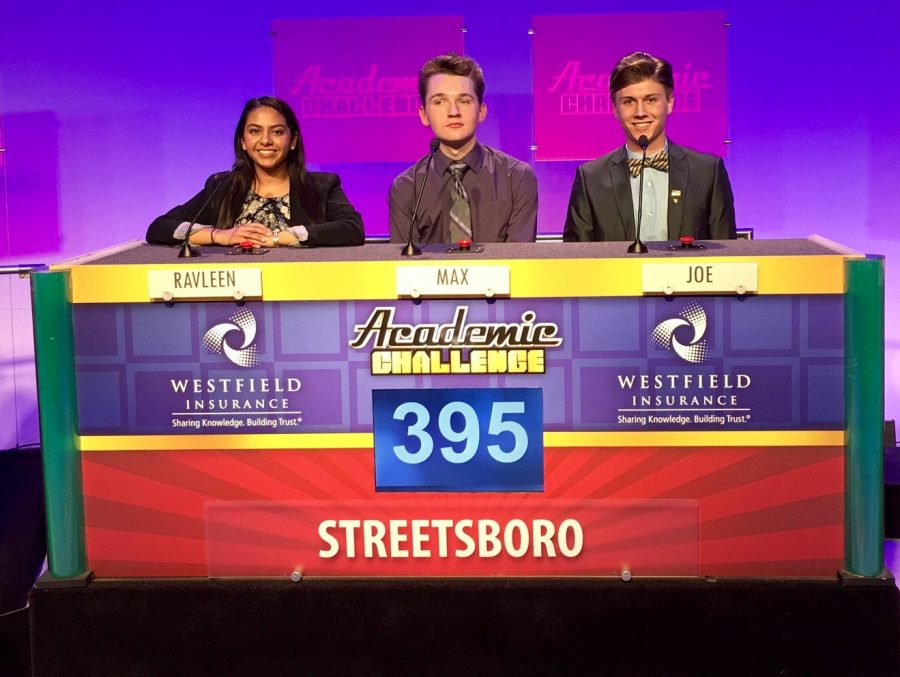 With a recent TV appearance, a John Cena Doll, and a chance at a nationals bid, the Streetsboro quiz bowl team has been receiving more attention lately.

Senior Max Grudowski has been in quiz bowl for the past four years. This “Jeopardy”-style club meets Tuesdays and Thursdays after school until 3:30. Students gather in adviser Molly Klodor’s room to play games, run scrimmages and take online quizzes on test topics.

These topics can involve anything from history to music, Harry Potter to Disney movies. Team members use this practice time to ready themselves for tournaments that come around once a month.

Streetsboro has three teams — Varsity, JV and freshman — to allow more people to participate in these tournaments.

The most recent tournament was the Academic Challenge, which Streetsboro has participated in for the past five years.

Grudowski was one of the three contestants — along with junior Ravleen Ingle and senior Joe Beaver — representing Streetsboro High School in the tournament.  The three contestants earned their spots in the challenge through an after school quiz.  The group competed against Holy Name and Black River.

“Whoever got the most points was on the team,” Grudowski said.

The Academic Challenge was recorded January 25, and will air April 8, at 7:30.

The quiz bowl team has competed in several other competitions, including the pop culture “Trash Tournament.”

Recently, professional wrestler John Cena has been spotted around the school. This is the result of Streetsboro’s win at the tournament.

“The John Cena — one of the proudest moments in the last four years of Streetsboro quiz bowl team,” said senior Anthony Mella, who just joined the group this year, and said he feels it is a good fit for him.

“I’ve always kind of been known as the guy with a lot of trivial knowledge,” Mella said.

At the Trash Tournament, questions ranged from memes to band names. Streetsboro came out on top, and since this competition did not count as an official win (not part of the monthly competitions) the trophy turned out to be the Cena doll.

Cena has been moving from the trophy shelves and from the media center to different spots throughout the building.

“We decided one day we should have the trophy moving and freak people out,” freshman Alexis Howard said.

Howard, who said she loves quiz bowl and enjoys the concept of learning new things, described the practice/competition process as “a lot of random questions, and even if you don’t know it, you’re learning what it is.”

Besides the Trash Tournament victory, Streetsboro’s record includes its first-ever nationals bid last year. The team ended up unable to attend due to a conflict with prom; however, if it earns another chance to go, members will travel to Chicago April 28-30.

Klodor has advised the quiz bowl for the past five years. She was a member of her own high school and said she wanted to support that type of group and environment in Streetsboro.

“Some of my best memories are from winning tournaments, bus rides with my teammates and crazy practices,” she said.

Even with one month left in this season, Klodor said new members are still welcome.