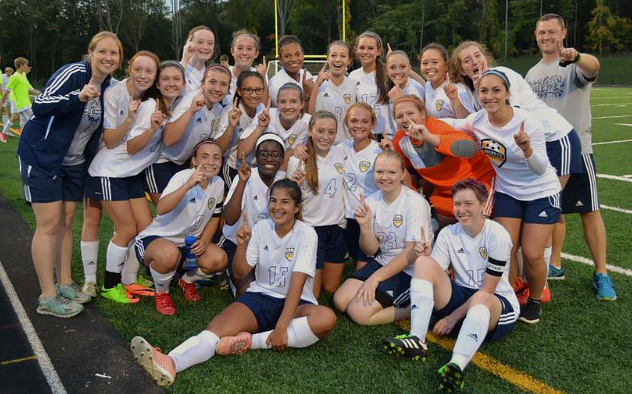 With a record of 12-1-3, the Lady Rockets soccer team has won the PTC title and broken the record for goals against per game, and the most goals, wins, and assists in a season.

Head Coach Ryan Willard said in his first six years of coaching, he never thought winning the PTC was a reality, but “this group of girls has the possibility to do it.”

He said they are “excellent students and are…great representatives of Streetsboro High School. This is the best and most talented team ever at Streetsboro.”

Willard said only a few years ago, the team was “super young,” with little experience, and the girls were not competitive in the county division. Since their promotion to the PTC Metro division, the Lady Rockets now play teams such as Cloverleaf and Norton.

“The Metro was a big step up,” Willard said. “After finishing seventh and sixth in the league the last two years, we have finally figured out how to win.”

Junior Fidelina Valverde-Rivera said she wants to go far in the post-season.

“I want to be able to say one of the best teams to ever go through Streetsboro went out with a bang,” she said.

Rivera was named MaxPrep’s Player of the Week August 25. This honor was based on her weekly stats and the number of votes she earned.

She had scored five goals this week, “four of which were in the first half,” according to the website, which went on to say, “but the most impressive goal was a beautiful header early in the second half. Her finishing was clinical this evening.”

Willard said Rivera is a good leader and the kind of player every coach wants on his team.

“This year she has elevated her play and has scored against just about everyone,” he said. “She seems to put herself in the right place all the time.”

“Normally, I’m someone who is, and enjoys to be more under the radar,” Rivera said, “so it was something a little different for me.”

She said she could not have gotten as far as she has this season without her teammates, especially senior Faith Deevers and sophomore Jessica Kline-Koester.

“While Jessica is more of a newcomer,” Rivera said, “I have been playing with Faith for years now and she’s always one of the first to congratulate me after a goal or a good foul. She’d tote me around in her car when I couldn’t drive and get me food after a game if I didn’t have money. I’m so lucky to have crossed paths with such amazing people whilst doing what I love.”

Deevers has played with Rivera for over six years. She said Rivera is “quietly influential” and her steady work ethic drives her to keep going.

“…She is a phenomenal player,” Deevers said. “So many times I’ve wanted to just stop playing, or not pay attention in practice, but Fide’s steady work ethic and drive pushes me to keep going… I am so proud she is able to be recognized for her efforts and ability this year.”

Rivera said the team’s success “just comes down to chemistry.”

“You can have a handful of the best players around,” she said, “but you’re gonna go nowhere if you can’t read and pick up on each other’s style of play.”

It took the team a little while to get used to playing together “[but] now everything is starting to click,” she said.

Junior Jessica Marason, the starting goalkeeper, said the girls have a “great connection” and do “everything together.” They have bonfires, parties and swim.

Most of the players knew each other through soccer when they were younger, junior Krista Prasek said.

She has played soccer with her teammates since the days of Streetsboro United. This is a club for young soccer players to join after they do Parks and Rec. Because there was no way to play after children had gotten to old to play in that league,, parents united together to form the club, which is still kicking today.
Senior Elliot Nichols recalled their first coach, Coach Deevers, Faith Deevers’ father.

“We’d play a game called, ‘Kill Coach Deevers,’” Nichols said. “…Everyone stood around and [he would] give us a soccer ball, and we’d pass to each other, and he had to try to get it, which was fun for us, and not so much for him.”

Nichols was named captain this year, before the season started; Deevers shared the title.

“Just knowing my team would trust me that much and believe that I could help them in that way, take on that responsibility,” Nichols said. “…The experience has been something I’ll never forget.”

Captains have to be good role models, Nichols said, and if they see someone struggling, they should go out of their way to speak with them and make sure they are okay.

Captains’ duties involve introducing themselves to the opposing team, meeting with the referees and competitors’ captains before each game, and participating in coin tosses to see which team starts first and what side of the field they will be on.

“Being captain is such an honor,” Deevers said. “This is my second year as captain and I’m still immensely excited for my team and the possibilities. It feels great to know that my teammates and my coach see my love for this team and sport. I know I wouldn’t be the person I am today without each person a part of that team, and to know they feel similarly towards me, is an incredible honor.”

Willard said both Nichols and Deevers have played significant roles on the team since they were freshmen.

“Elliot is just one of the most steady defenders we have ever had at Streetsboro,” the coach said. Willard noted that Nichols rarely makes mistakes and is a reliable teammate.

As for Nichols’ co-captain, “Faith has come so far,” Willard said. “She will leave as one of the best players ever at Streetsboro. She could have amounted even more statistics in her career, but over the last two years she has played a lot of defense without ever complaining and, along with Elliot, has created one of the best defenses in the PTC.”

“Of all three previous years playing soccer,” Nichols said, “this could very easily be the best team I’ve ever played on, and not just record-wise.”

This loss ended the Rockets’ post season as well as their regular season.