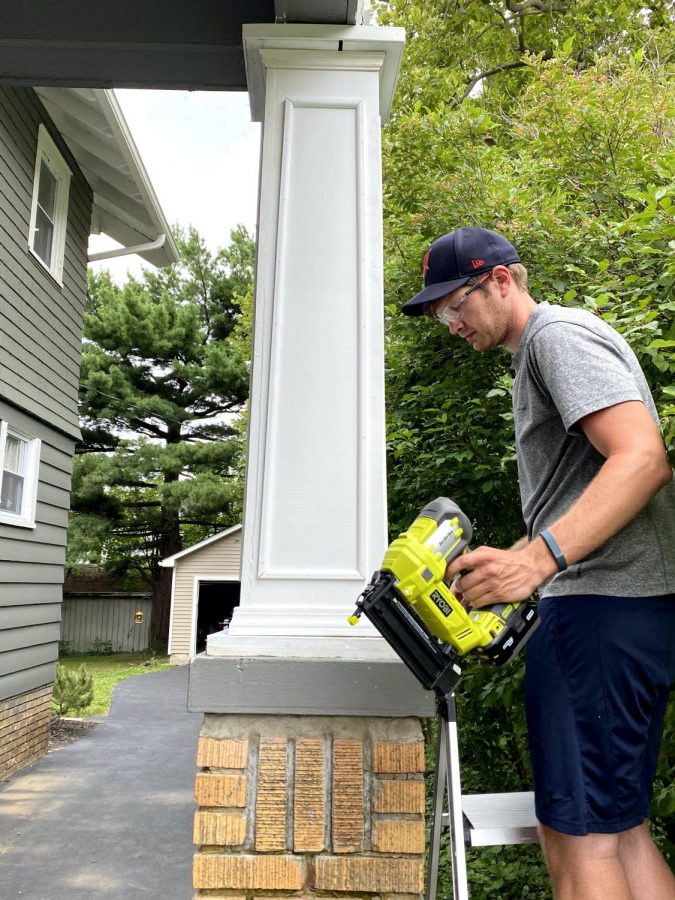 Matt Klodor, husband of English teacher Molly Klodor repairs their carport as one of their quarantine projects

Quarantine in 2020 gave everyone a lot of free time to do whatever they  wanted, but on the other hand, it also limited a lot of the things people could do.

Some took the safe approach and stayed inside; others got out to enjoy activities and travelling that felt safe enough within the guidelines.

Junior Blake Morris did a bit of traveling, of course following the COVID guidelines. In Tennessee, he went boating, wakeboarding and skiing.

“In Tennessee, where we went boating, it was just a lot better and more fun,” he said. “The lakes were bigger and better, also a lot deeper, plus with better channels for flatter water. It was a lot more fun than the lakes in Ohio.”

Morris said he kept himself busy with different activities. “I wasn’t really that bored and I hung out with friends and family that were close to me, so we went dirt biking and to the lake a lot,” he said. “We also made some model rockets. We had a launch when it was cloudy and we never saw it again.”

English teacher Molly Klodor, on the other hand, said she “took a lot of time to read and play board games with my husband. I spent less time traveling and saved a fair amount of money on gas.”

She also said watched TV and played Animal Crossing on the Nintendo Switch her husband Matt, bought for her.

Klodor did use the free time to do outside activities as well.

“I have never been on so many walks in my life,” she said. “I bought an exercise bike for my basement and went on a ton of hikes. I tried to get into running and realized that I really hate running.”

Quarantine also made Klodor realize after not seeing family and friends for so long, when this pandemic ends, she said, she wants to be able to prioritize those relationships.

Klodor spent most of her time with her husband, who is also a teacher. “He definitely made quarantine better,” she said.

Having recently bought a house back in 2019, they decided to use some of their quarantine time to finish up house projects.

“We rebuilt our carport, built a fence, filled in the backyard with dirt, attacked a bunch of thorn bushes in the side yard, pulled ivy, and painted some unfinished spaces,” Klodor said. “We were very glad to have had the time to do these things, as otherwise we probably could have only accomplished two or three of these huge undertakings.”

Radio and TV teacher Bob Long said he spent a lot of time at the station or inside his home, not doing much. “I was still busy with the radio station every day,” Long said. “But when I wasn’t busy with that or cooking, I would read a book.”

An organized teacher and person, Long said he likes to plan ahead for each semester, but with how crazy the schedule has been, he had to learn how to adapt.

“I have finally accepted the fact that I can only plan one week ahead,” he said, “and even that needs to be flexible. It’s been a real change of mindset for me.”

Like many others, Long’s travel plans were ruined by COVID-19 restrictions. “We were going to leave New York City on the Queen Mary 2 [a 3,000-passenger, hotel-type boat] and sail across the North Atlantic to England and then spend a week around London,” he said. “We had planned it over a year before.”

Long was able to get away to Burr Oak State Park near Athens, Ohio with friends for a few days.

While home in quarantine, Long said he enjoyed spending time with his cat, Nikko.

“Nikko and I ended up spending so much time together that now she doesn’t have a problem with that,” he said. “We got along very well, as long as I fed her every time she got the urge to eat. I think I probably overfed her.”