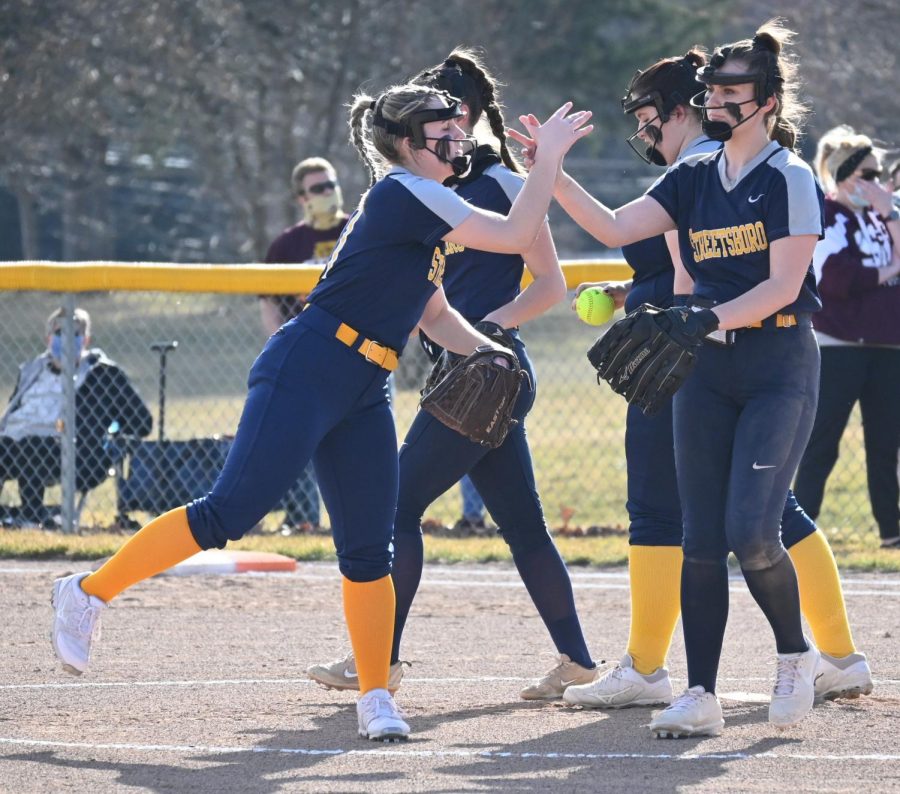 Juniors Kennedy Danna and Raelynn States do a handshake before heading out to their positions during a pre-season scrimmage.

With two new Varsity coaches and COVID protocols in place, the softball team is now 1-1 for the season, after a loss to Roosevelt over the weekend and then an 8-4 win over Lakewood last night.

Varsity has a full schedule of 26 games and JV will play at least 14 games in a conference-only schedule.

Head coach Matthew Helm and assistant coach Katelyn Mueller are making sure the girls are putting in maximum effort and hard work after missing out on their 2020 season.

“The girls are working very hard to make sure that we are ready for game day,” Mueller said in early March. “I think that they will be competitive and ready to go.”

Mueller initially joined the Streetsboro staff this year working in the middle school office. “I have played softball my entire life, so when the opportunity presented itself I knew it was the right fit for me,” she said.

Varsity second baseman, junior Mallory Rice, is ready to showcase the work she put in during the off-season. “Being a consistent player, I would rather have a great season than having one AMAZING play,” she said.

Practices and games look a little different from years prior because of the pandemic.

Mueller said players wear masks when not actively participating in the game. “We will be spacing out in the dugout as best as we can and will have plenty of hand sanitizer available,” she added.

Helm is new to coaching softball but has been with the Rocket football team for three years. “I see all the success and growth all the other programs have had and felt that softball would be a challenge to me and that a different approach to things would help and move the program forward,” he said.

Mueller added that because the 2019 season, the last the girls played, they only won three games. “We are looking to build on that and really focus on our defense.”

Helm said, “This team is ready to play and has already put on a small display in their first scrimmage with some strong hitting, pitching, and defensive stops. From here it’s just about fine-tuning things and enjoying the opportunity to play.”

The new coaches are “more laid back and patient with us compared to last year,” Rice said. “This year the coaches let us make a lot of our own decisions.”

Helm noted that the team consists of two seniors (Sam Miller and Jenna Gadomski) “and then a sizable junior class with a lot of promise and talent. The freshmen class will contribute a lot to the season as well with some playing up to the Varsity level as well. “

Both the freshmen and sophomore players are new to the high school level of softball play after missing out on the season last year due to COVID.

Helm has even higher hopes for the girls as they return to the field.

“I know expectations are not high around the league for us, but we know exactly what we are capable of, and with some attitude and being aggressive on the diamond, the Rockets will be a talk of the conference…”