Aside from “revealing” clothing, the easiest way to get dress-coded is to wear a hood or hat.

Teachers can constantly be seen calling out to a student in the hall or stopping class to tell students to remove their hoods.

One reason hoods are such an issue is because of the “no earbuds” rule. Many teachers are worried that students are able to hide that they are listening to music in the middle of class, underneath their hoods.

Judd said hoods disrupt class more than anything because he has to constantly ensure that students are listening to him instead of their earbuds.

Sophomore Bobvi Thomas does not agree with the “no earbuds” rule. 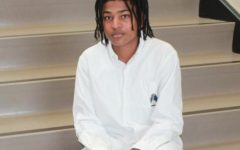 I can understand the regulation of earphones in the classroom to an extent,” he said. “I do not agree with the total ban of earphones in class since some students, like myself, produce better work with music.”

Thomas continued, “If students were allowed to have earphones when work is assigned I believe there would be a significant increase of efficiency in the classroom setting.”

While Judd does not like to see earbuds/hoods while teaching, he again returns to his neutral stance on the code. “If it’s not disrupting class then I could care less, to be honest.”

Another reason hats and hoods are banned is because teachers see them as a safety issue. Many staff claim hoods will render students unrecognizable in case of emergency.

Students have said they do not understand that statement, as the teachers regularly use students’ names when telling them to take a hood down.

If anything were to happen in the school, the cameras cannot identify students wearing hoods. “If we ever have to look at anything, like on the cameras, you can’t always tell who it is,” Taylor said. “Especially with masks, this year is worse than any year because of masks.”

History teacher Kris Gaug, acknowledged that hoods might be a safety issue in some schools, but said, “It could sometimes… hide who someone is, but I don’t really know that that’s an issue in a school this size.”

Gaug also said constantly having to tell students to pull hoods off their heads is “…more hassle than it’s worth to enforce that sometimes. I just don’t personally see the value in it, maybe others do.”

Hoods/hats can also be seen as a respect issue.

If you want a picture to show with your comment, go get a gravatar.