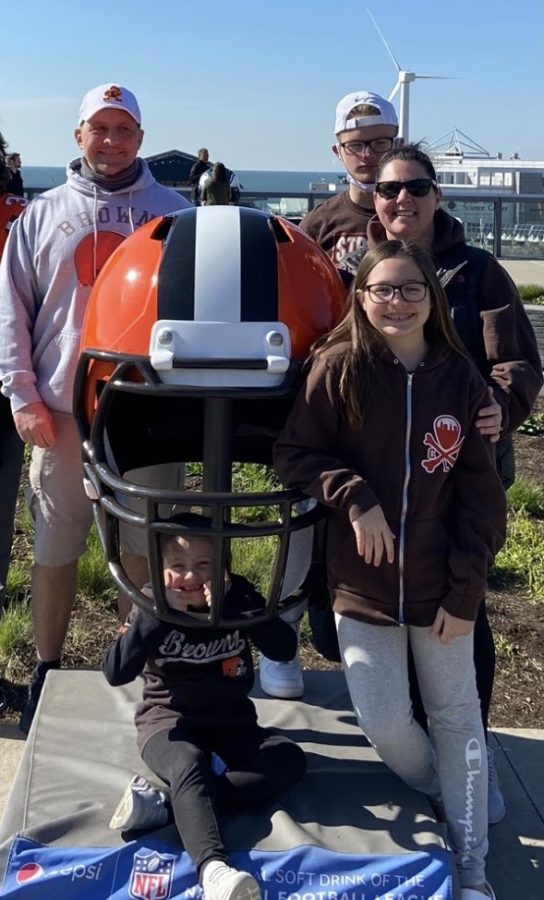 Senior Owen Stiftar and his family saw everything on display downtown the day before the draft. Saw stage, every team’s helmet on display, saw the Cleveland signs. Dad, stepmom and sisters. Wednesday, April 28 “First time something exciting’s happened in Cleveland since the Browns playoff game.”

As an NFL junkie, I would have been heavily invested in the 2021 Draft regardless, but the fact that it happened in Cleveland, well, it’s hard to find words to describe how excited I was.

Dissecting team needs, seeing which positions they need to address, and who they might target in the draft is always a good time. Throughout that process, fans fall in love with certain prospects and hope their team drafts them…but they usually always go in a different direction.

The draft brings excitement like no other, and after just the first three selections, a 21-year-old streak was broken.

For the first time since 1999, quarterbacks were selected with the top three picks: Clemson’s Trevor Lawrence by the Jacksonville Jaguars at No. 1, Brigham Young’s Zach Wilson by the Jets at No. 2, and North Dakota State’s Trey Lance by the San Francisco 49ers at No. 3.

The Lawrence and Wilson selections were foregone conclusions weeks before. San Francisco’s choice of Lance, on the other hand, had been a closely guarded secret.

Quarterback heavy classes are always the most exciting because that is the most important position in football, and seeing where they land is always captivating.

My favorite prospect in this class is without a doubt the tight end out of Florida, Kyle Pitts. Setting my fandom aside, I got to watch Pitts dominate college defenses for 14 games last season. The 6’5” phenom has drawn comparisons to the great Tony Gonzlaez — who may be the best the position has ever seen — and was inducted into the 2019 Hall of Fame class.

According to his Relative Athletic Score, Kyle Pitts tested as a 96th percentile athlete. So not only is he going to give opposing defenses issues with his size, Pitts is also a better athlete than most defenders in the league.

Regardless of if he lives up to the Tony Gonzalez comparison, which is steep, the Atlanta Falcons got themselves the most versatile player in this draft, and I’m beyond excited to see what he can do.

Aside from the top selections, I loved the Browns’ draft. We desperately needed help on the defensive side of the ball heading into the offseason, and we addressed that emphatically in the draft. Picking up versatile talent in corner Greg Newsome II, and linebacker Jeramiah Owusu-Koramoah, the Browns are going to be dangerous next season.

To bring everything back to focus, the NFL Draft is one of those can’t-miss events for me. It’s kind of like the Superbowl, or NBA Finals. The excitement and suspense it brings elevates the draft among the elite sporting events the world has to offer.

One day I hope to attend the draft, not only to watch, but to be on the podium evaluating talent as well.

The 2021 NFL Draft concluded on May 1, yes, but the look into next April’s draft has already begun. Talent will rise, and talent will fall based on their production next season, and I’m here for it every step of the way.