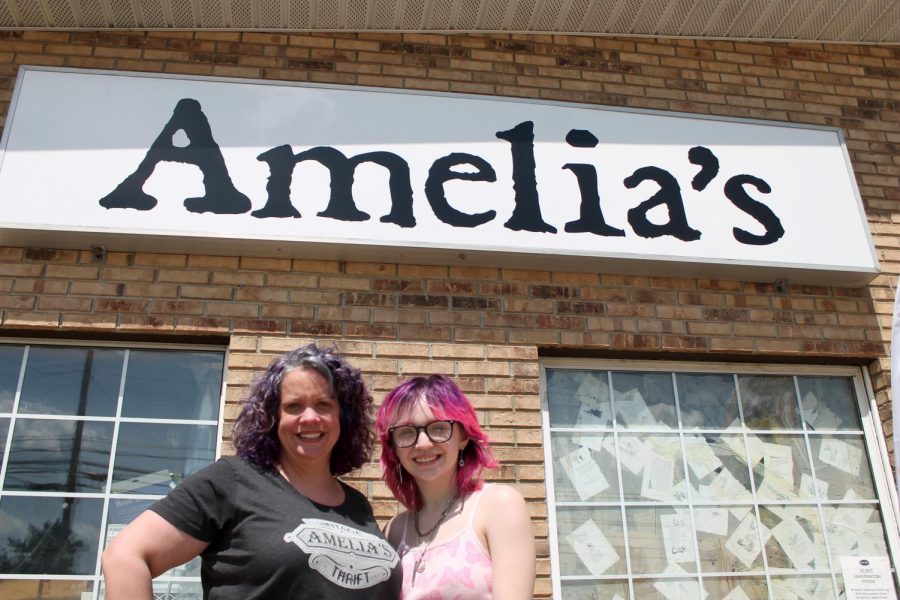 Owner Erin Reuter and her daughter, senior Amelia Reuter, opened Amelia's Vintage & Thrift in 2020. The store is just down the street from SHS, right next to BW3's.

Amelia’s Vintage & Thrift, the new vintage store in Streetsboro, is owned by Erin Reuter, mother of senior Amelia Reuter and named after her daughter.

The store (which was formerly Fabulous Finds) is located at 9058 State Rt 14, right next to Buffalo Wild Wings, and just down the road from the school.

Erin Reuter said she had always wanted to own a small vintage shop.

“This gives me the thrift store part that pays the bills and I can still highlight certain vintage items when they come through,” Reuter said.

When she first took over the store, there was so much she needed and wanted to do. Reuter said she was overwhelmed at first because they were doing renovations while receiving donations at the same time.

Reuter said her favorite thing about opening her shop is connecting with the customers. She has some regulars who she knows by first name and gets scared when she does not see them in a while.

Some of the weird things the Reuters have found while sorting through donations include a picture of 1930s child actress Shirley Temple with real human hair. The photo was supposedly done in the 40s or 50s.

Reuter said they also find it a bit weird how many people actually donate knives.

The most expensive thing they have found has been a slightly used Louis Vuitton purse worth up to $1,500.

Reuter said all the old vintage things are most interesting to her because she loves looking at and researching them.

“I was disappointed that we didn’t have more people taking advantage of our Prom dresses,” Reuter said. “We have several with the tags still on…super cheap.”

Speaking of dresses, the Reuters helped pick out a bride’s last-minute wedding dress and all were all in tears for the occasion. Someone else in the store at the time, a complete stranger to the bride, ended up paying for it.

The store runs 100% on donations, though Reuter said she is also looking into consignment options. The store accepts all donations the last week of each month and even accepts furniture, as long as people call before dropping off.

Amelia’s is named after senior Amelia Reuter, who said, “It feels awesome having a store named after me. I love my mom and it means a lot. My mom has always talked about having her own business, so I’m super excited for her and seeing her follow her dreams.”

She goes into the store about two times a week and usually leaves with something she likes each time.

“There’s so much there, it’s like something new every day,” Amelia Reuter said.

Her mom finds her a bunch of old band shirts and really cool vintage clothes, she added.

Amelia Reuter even found a dress from the 50s that fits her perfectly.

Senior Caleb Lanning is one of the employees at the store.

“Working there is really fun, it is very relaxed and most of the time I can just do the things I want to do. Nobody ever yells or gets angry, and all of the customers are really nice.” he said.

Just like the Reuters Lanning has found some weird and expensive things.

“The weirdest thing I have found was an old G.I. Joe figurine, with none of the clothes on.”

“The most expensive thing I have found was a vintage m&m jacket, I think the price of it was around 300 dollars!”

Senior Blake Winters, a friend of Amelia Reuter’s, visits the store often to look for treasures.

“My favorite thing is definitely my little brown shoes,” he said. “They are the perfect ‘old man’ shoes and I’ve never been able to find another pair just like them.”

He also recalled a Scooby Doo telephone there he said “was awesome but also odd.”

Another student who shops at Amelia’s is senior Makayla Goodrich. A fan of Winnie the Pooh, her favorite item from the store so far is an Eeyore jean jacket.