Cleveland Cavaliers make a statement in the East

Capturing a moment outside of Rocket Mortgage Fieldhouse March 14 are seniors Lyndsey Snowdon and Lily Batten and freshman Makayla Claflin. The girls were not only there to attend the Cavs game, but to sing the national anthem beforehand with the choir.

Just a few months away from the 2022 NBA playoffs, the battle for first place in the Eastern Conference has begun to heat up. A few teams, including the Cleveland Cavaliers, have been playing very competitively to secure their playoff spots. Cavs are 39-29, and in sixth place (as of March 16), just six games behind the current first-place team, the Miami Heat.

After a couple of seasons of rebuilding, the Cavs have had a dramatic turnaround and are starting to look like real contenders for upcoming titles. The future is seemingly bright in Cleveland with the refreshing new coaching staff, and a roster full of young talent. Along with the young players, the Cavs also have a few league veterans, 33-year old Kevin Love, and 35-year old Rajon Rondo, who aid in mentoring and guiding the team to victories.

Some of the stand-out young talent that has helped lead the team to some big wins this year are Darius Garland, Evan Mobley, Issac Okoro and Jarrett Allen.

The Cavs leader in both points per game (21.2) and assists per game (8.3), 22-year-old guard Darius Garland has been a crucial player for the Cavs this season. He has shown leadership in his playmaking while also being a solid defender.  After just suffering from a lower back injury, Darius Garland made a stunning return with 27 points and six assists in the Feb. 9 game vs. the Spurs. The young guard, who was also picked to be an NBA All-star, shows no signs of slowing down this season.

P.E. teacher and Cavs fan Krista Romance backed Garland’s achievements by saying, “Not only has he been able to step up, but this has really become his break-out season. The fact that he was selected to the All-Star team this year is evidence.”

Issac Okoro, the 22-year old small forward/shooting guard, has also been very explosive and energetic to watch this season.

Senior Thomas Howell shared his take on Okoro. “On offense, he has been very athletic and fun to watch attack the basket, and on defense, he’s a very tough to get around and hardworking perimeter defender,” he said.

Then there is Jarett Allen, the 23-year-old center and 2022 NBA All-Star brings great interior defense and athleticism to this team. On the season he averages 1.3 blocks per game.

And finally, there’s Evan Mobley. The 20-year old center/power forward has made a huge statement in the league this year. Averaging 15.1 PPG and 8.3 RPG and 1.7 BLK, he brings an impact to both sides of the floor. He is a clear front-runner for NBA Rookie of The Year as he has the best odds in Vegas and is favored by NBA and ESPN journalists.

Over the February All-Star Weekend held here in Cleveland, Cavs players showed out on their home court and helped earn a couple of great wins. The rookie trio of Garland, Mobley, and Allen showed off their skills and earned the highest score, winning the 2022 NBA Skills Challenge.

Mobley and Issac Okoro helped bring a win to Team Barry in the 2022 Rising Stars game. Lastly, Garland and Allen contributed to the Team Lebron victory in the All-Star game.

Cleveland has earned recognition from big names in the league including defending NBA champion Giannis Antetokounmpo. According to  Cavs Nation Writer, Brad Sulivan, After a 115-99 win over the Milwaukee Bucks on Jan. 26, Giannis “gave a stern warning to the rest of the league”,  He warned that Cleveland is a team to watch out for and most importantly a team to respect. 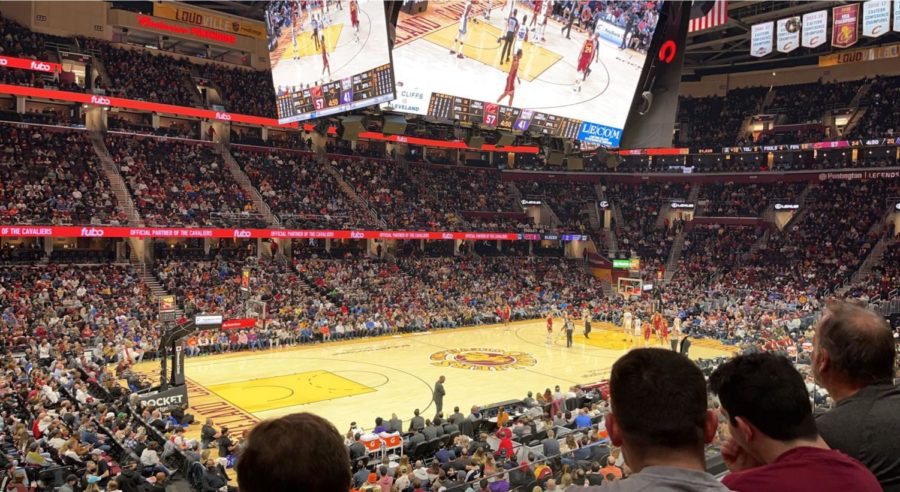 Overall the team’s energy and fellowship have been undeniable this season.

“They seem to have amazing chemistry, which in my opinion, can often take teams much further than just talent alone,” Romance said.

This promising team is giving Cleveland something to look forward to this year.

“It’s been an exciting year to be a Cavs fan,” Howell said.  “We have been winning some big games, ”

The Cavs have not made the playoffs without Lebron James on the roster since 1998, and this could be the year that changes.