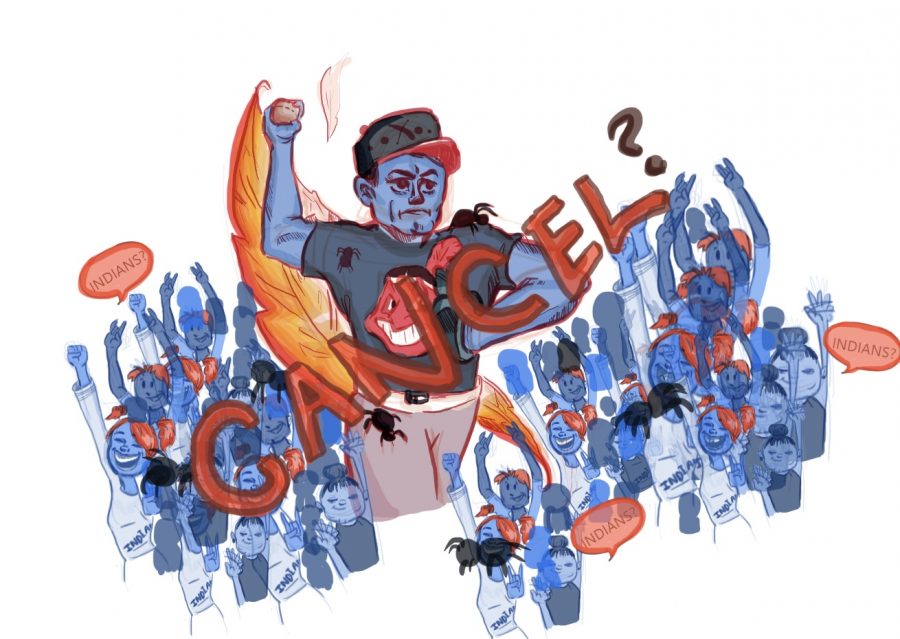 As Cleveland’s baseball team plays its last season under the name that has been deemed offensive, fans here at SHS share their opinions on the change, what they think the team should be called instead, and whether they will continue to wear merch with the Chief Wahoo logo.

SHS sounds off on names and Chief Wahoo merch

Cleveland Spiders…Rockers…Blues…All are in the running as the new name for the Cleveland Indians.

Fans here at SHS are expressing a variety of feelings about the upcoming name change of their hometown baseball team.

Some say the name is tradition and should remain; while others understand the reason for the change.

According to a story on Case Western Reserve’s online news site, The Observer, the team’s Chief Wahoo logo has been around since 1947 and for nearly seven decades.

The Cleveland Indians officially announced in December that the team’s name would change following the 2021 season.

The current frontrunner, according to The Observer, is the “Cleveland Spiders,” which references Cleveland’s brief National League team in the late 19th century.

The “Cleveland Blues” was the team’s original name at the time of their inauguration in 1901.

Health teacher Chris Scisciani (“Scis”) said he does not support the idea of change.

Scis said he still has Chief Wahoo logo merch and would still wear it.

Assistant principal Julie Taylor agreed with Scis. “As far as the name change, I am a firm believer in keeping this as they always have been; however, I do see both sides to the choices. I would like them to be Indians, always, but their stadium has changed names and I have learned to just go along with it. I will probably still call them the Indians even with the name change, because it is out of habit.”

Like Scis, Taylor said she will keep her Chief Wahoo merch. “I have a ton of Indians gear and always wear it and would still be willing to wear it,” she said.

The Cleveland Indians will play one more season under their current name, according to a New York Times article. Although the decision to adopt a new team name was only announced at the end of 2020, opposition to the idea has been around for decades, the article said. The earliest accounts of protest date back to the 1970s; however, the protests were ignored by many people, including the team.

English Molly Klodor supports the name change. ”I’m glad the team is reconsidering the name,” she said. “I think there’s room for growth.”

As for what the team could be called instead, she said, “I saw someone mentioned the Cleveland Guardians, after the ‘Guardians of Traffic.’ I love that idea!”

Klodor said she also has some old merch. “I haven’t worn it for a while and I won’t, especially if it has the Wahoo logo,” she added. “A lot of my shirts say ‘Cleveland’ and I’ll keep those.”

Klodor said she will try to use the new team name, once it has been decided.

“I’m sure I’ll make a slip or two and still call them the Indians, especially since this season they still will be,” she said, “but I’ll get used to it eventually!”

Physical education teacher Krista Romance also said she is “fine with” the name change and would like to see it be “something that is steeped in the tradition of both Cleveland and baseball.”

“I don’t have merch that references Indians, actually,” she went on to say. “My gear says ‘Cleveland’ or has the block ‘C,’ so I will probably continue to wear it. I know that it is a controversial decision and many people are opposed to it, but I believe in not doing harm to others. If the current name causes harm to others, then I think it’s appropriate for the organization to consider making the change.”

Like most of the others, principal Brett McCann said he can see both sides to the argument. “There were/are more offensive names out there (Redskins, etc.),” he said. “However, not being Native American, it’s difficult for me to truly gauge the level of frustration those groups have.”

As for the new team name, McCann said, “One nickname I heard that I would really like would be the Dobys, which would be a tribute to Larry Doby, the first black player in the American League.”