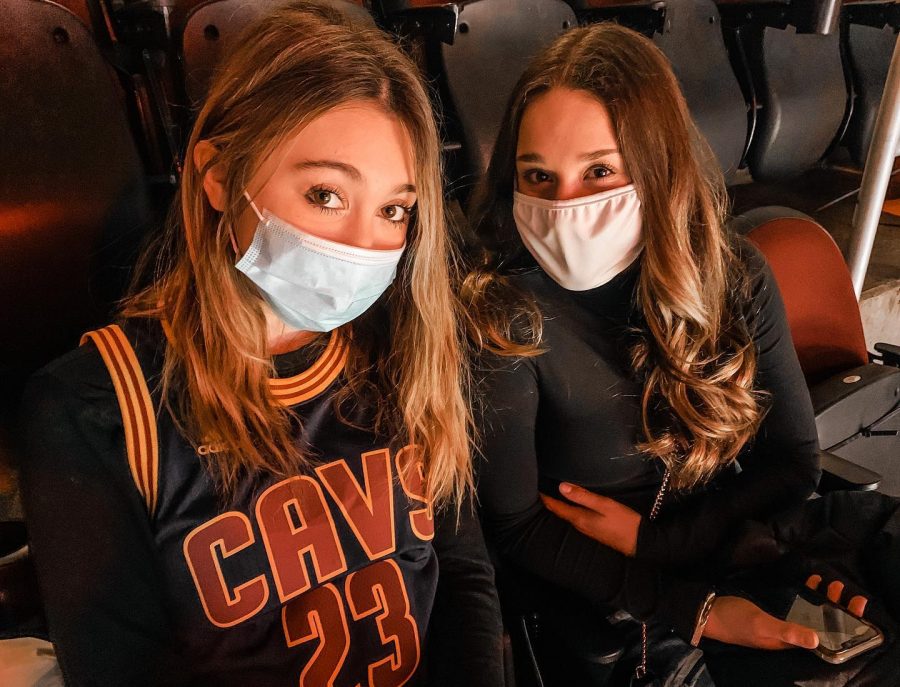 Senior Olivia Rhinehart and sophomore Arai Marino attend a Cavs game. The Cavs are allowing fans, but not at full capacity yet.

The Cleveland Cavaliers had some realistic opportunities to stay close to the #10 spot in the NBA Eastern Conference race with a chance to then participate in the “play-in tournament” to get to the NBA postseason.

After recently being eliminated from playoff contention, however, this leaves the fans wondering: Where do we go from here?

As of now, the Cavaliers currently stand at 21-45 (as of 5/5/21), nine games behind the Washington Wizards, who currently sit at the #10 spot. Though we’re staring at another long offseason, I do believe, however, we can still finish this season on a high note, despite not making the playoffs.

Since we aren’t currently a contending team, it’s quite alright to miss the postseason and continue to grow our young core. The Cavaliers have a lot of questions to answer for our future, and step one is to figure out: Who is our core?

Collin Sexton, a young 22-year-old guard, received legitimate All-Star consideration this year, but unfortunately didn’t make it. Nonetheless, Sexton’s shown premier upside as a scorer, and will likely receive a nice contract extension this summer. It seems the Cavs have the young guard in their future plans as well.

Math Teacher Ryan Spence said he also believes in the young guard. “Sexton has shown he’s the real deal this year, and we need to build a team around him,” Spence said.

Darius Garland, a young 21-year-old guard, is currently the counterpart to Sexton in our young backcourt. The two have made dramatic improvements this year as far as their play, earning the nickname “Sex Land” from the fans. Garland has arguably the most potential of any player on the roster, however, the fit of these two together is a real concern.

With both guards being listed at 6’1”, there are legitimate defensive concerns, which is why some questions need to be answered. Senior Mason Kamlowsky shared his take on the young backcourt. “I believe it could work, just not in our starting lineup,” he said. “Due to both guards being undersized at the position and below average defenders, we’d most likely have to make a decision on who will start, and who will come off the bench if we plan to keep both.”

Isaac Okoro, the young 20-year-old rookie, has had a promising first year. Okoro brings the defensive ability and versatility our backcourt lacks, which is very valuable. He has to continue to grow and improve the offensive part of his game to become an eventual star in the league.

And finally, there’s Jarrett Allen, who we received in a trade just a few months ago. The 22-year-old center brings elite defensive skill to the game, which again is needed with our backcourt.

I believe this is our set core for the future, but I’m not in the front office making these crucial decisions.

Another question the Cavaliers will have to answer is the state of Kevin Love. The 32-year-old veteran, who helped Cleveland win their first title back in 2016, has yet to make an impact in the post-Lebron era. Due to Love’s massive contract, the Cavs have very little wiggle room when it comes to free agency, and though Cleveland isn’t an attractive city, the extra money could never hurt.

At the end of the day, the NBA is a business, and what we’re paying Love is absurd for his production. The best ability is availability, which is something Love hasn’t brought in recent years.

“Yes, he brings a veteran presence and leadership to the team,” Kamlowsky said, “but you don’t pay $30+ million for leadership, especially with the production he brings…It’s just better to move off an aging star now and use that money elsewhere to help out our team.”

While Cleveland’s promising start to this season may have raised expectations, the reality remains: the Cavs still need lottery luck more than anything else to jump-start their rebuild.

Spence backed this by saying, “The Cavs did look good to start, but they have definitely worn down as the season has gone on. It just shows the Cavs are farther away from putting it all together than we originally thought.”

The Cavaliers, without a doubt, have a ways to go before competing again, but answering these questions and capitalizing on our draft picks is a good start. In fact, there are some prospects in this draft that can turn franchises around.

Kamlowsky had some ideas. “We should target Cade Cunnigham,” he said. “We’re talking about a 6’7” guard who can do it all while being one of, if not the, most versatile players in the draft.”

He continued to praise the college star as he added, “Cunningham is the can’t-miss prospect in this class.”

Although the Cavaliers have had this lottery luck in the past, it’s very unlikely it will happen again. There are prospects like Jonathan Kuminga, or even Evan Mobley, however, who fit exceptionally well with our existing core.

Safe to say we’ve missed one Lebron James here in Cleveland, but we can’t dwell on that forever. It’s time to start a new success chapter for Cleveland basketball and looking at this season, the light is definitely at the end of the tunnel for the Cavaliers.