Focus on books, not on bodies

As young as third grade, young girls are told to cover up their shoulders. This is where some believe the system’s slippery slope of sexism starts.

Assistant principal Julie Taylor, a supporter of the dress code, said she will usually be the one to address violators to help avoid an uncomfortable situation, as she admits when the months get warmer “It’s usually the females.”

Examples of warmer-weather clothing items that pose a problem are midriff tops, halter-tops, tube tops, skin-tight or see-through shirts. All tops must have sleeves.

This rule may not appear unreasonable, but when one realizes that mainly girls get dress-coded on these regulations, it raises some controversy. 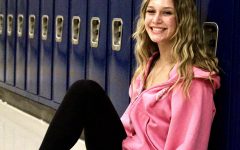 “Instead of teaching boys not to have this skewed image and overly-sexualized image of women in their head, it’s teaching women to cover up so the boys don’t have to deal with that..”

Students have reported seeing boys wearing their “wife-beaters” (sleeveless shirts, usually white) to school, but have not seen staff members calling across the room that these shirts are “distracting” and that they need to cover up.

Another rule specifically centered around girls that could be argued is the tights rule. According to the code, “Tights must be covered by shorts, skirt or dress of the appropriate length…a long shirt is not sufficient.”

This rule can also be applied to leggings.

While some feel these rules will keep things school-appropriate in the learning environment, others believe the rules make things worse.

“First of all, it’s misogynistic,” said freshman Olivia Hall. “Second of all, it’s implementing rape culture into our school and oversexualizing young women,”

“Rape Culture” is an environment where prevailing social attitudes have the effect of normalizing or trivializing sexual assault and abuse, according to Oxford Languages.

In simpler terms, it is a society so accustomed to oversexualizing women that it enforces the idea that a woman being victimized is her own fault.

It gives the idea that it is okay when things happen to her because she was “asking for it,” Hall said.

The system is, unknowingly, giving young women the impression that it is their fault they are being objectified. In reality, as Hall also pointed out, a girl could wear a long-sleeved, full-coverage shirt and long pants, yet still get stared at.

The rules about leggings and shirt length are being implemented to try and preserve the learning environment, but instead of learning the curriculum, students may be learning the wrong ideas.

“Instead of teaching boys not to have this skewed image and overly-sexualized image of women in their head, it’s teaching women to cover up so the boys don’t have to deal with that,” Hall said.